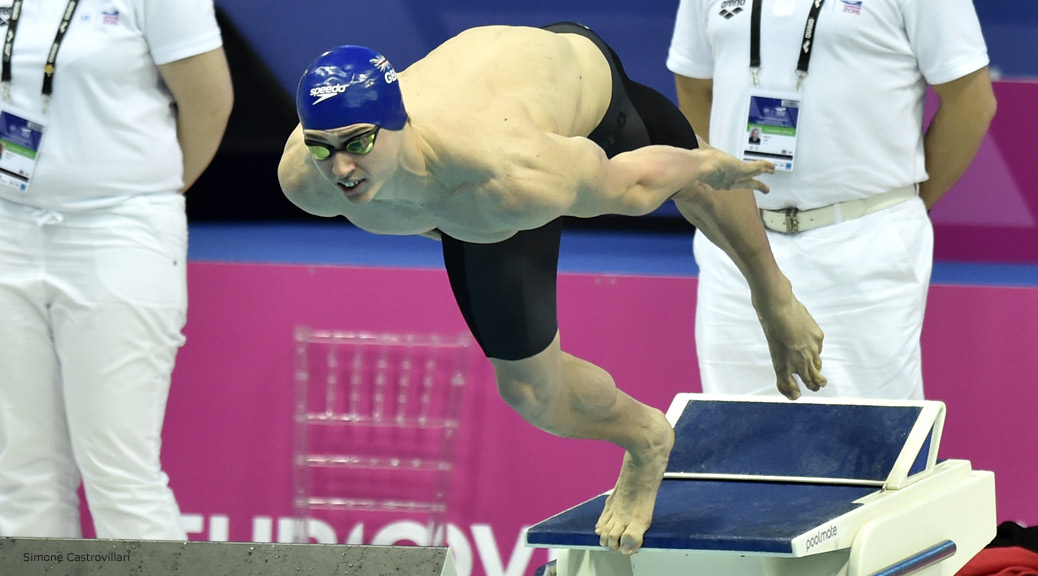 The men’s 50m freestyle is the testosterone zone of the swimming world; big men attempting to assert their dominance over the others in what can be almost a lottery of an event. It’s not an approach that sits comfortably with the relatively mild mannered Ben Proud who is happy just to be himself. “You see that in a lot of sprinters, people who are kind of flaunting their stuff and they are kind of quite confident people but you know, I’ll be the person I need to be, who I feel comfortable being just before the race.”

He does accept though that the mental side of the splash and dash has its place. “Maybe I’ll need to play more mind games on other people before the race but at the end of the day I’m just trying to get as fast as I can. My personality might develop over the next couple of years but it’s all about me staying calm when I race and not putting myself under any pressure.

“But I don’t want to be completely relaxed. Because it is a big thing and I really want to perform well but I don’t see the point of putting on added pressure because there’s a lot of pressure from the whole world really. All I’m doing now is doing what I need to do, focusing on the things that are going to get me close to a medal.”

Pressure is a big word in the Proud camp, and he himself is acutely aware of its impact, acknowledging that some of his best swims, such as his 100 freestyle blast at BUCS and his 50m freestyle British Record in heats at trials, have come in races where he has not faced as much pressure – all the more reason why his European bronze was a vital stepping stone to Rio..

“The records I’ve set have been in lower level races, but that’s why I feel more confident from the Europeans” he admits. “I swam okay times, 21.84 and 21.85 in the finals, and I can take a lot of confidence away from that because I know that even in the biggest final I didn’t back off my speed and that’s in the end of the day what’s going to get medals in Rio.”

It’s an approach that has borne fruit for the Plymouth swimmer with Commonwealth titles in 2014 added to that a bronze, but as with all of the British team heading to Rio he is hoping to add more to his collection, and has been leaving no stone unturned with his coach Jon Rudd. “I’ve been spending a lot more time in the gym and focusing on speed especially this year” he says. “Things have definitely come on since the world championships last year; I’ve also done a lot of work on my dives and I think they are definitely better than last year, I have tweaked them a little bit and seen some improvements there.”

Proud’s start has always been one of his most potent weapons, so improvements there will add to his 50m chances in particular, but it’s not all about the one length dash. Proud has been also working on this 100m, with Rudd admitting openly they had been adding that more to his repertoire with a view to a swim on the medley relay team. He will also swim the event individually in Rio, up against Duncan Scott, the coming man in the longer event. “The more the freestyle is developed the better in the long run so it’s great to have Duncan around and he’s posted some really, really fast times in the past couple of months. He keeps me on my toes, and I think having him around is definitely going to push me.”

It was Scott that took on the medley anchor in London, but that just adds fuel to the Proud fire. “Swimming in the 50m is great but it’s an individual race, I’d like to be part of a team event and watching that race was a real game changer for me, it really helps motivate me. Duncan is really tough consumer, so it’s going to be really interesting to see who is in better shape when we get to the Olympics” he says before reflecting further on the medley relay. “We won the past two European Championships and the Commonwealth Games, and that was a big turning point for Great Britain because it kind of showed the rest of the world that we do have the potential”

But regardless of that relay there is a job to do over one length of the Rio pool. Proud is clear what he needs to do: “In the 50m it’s all about getting right up on the day and getting things spot on.” He makes it sound simple – he’ll be hoping it is.