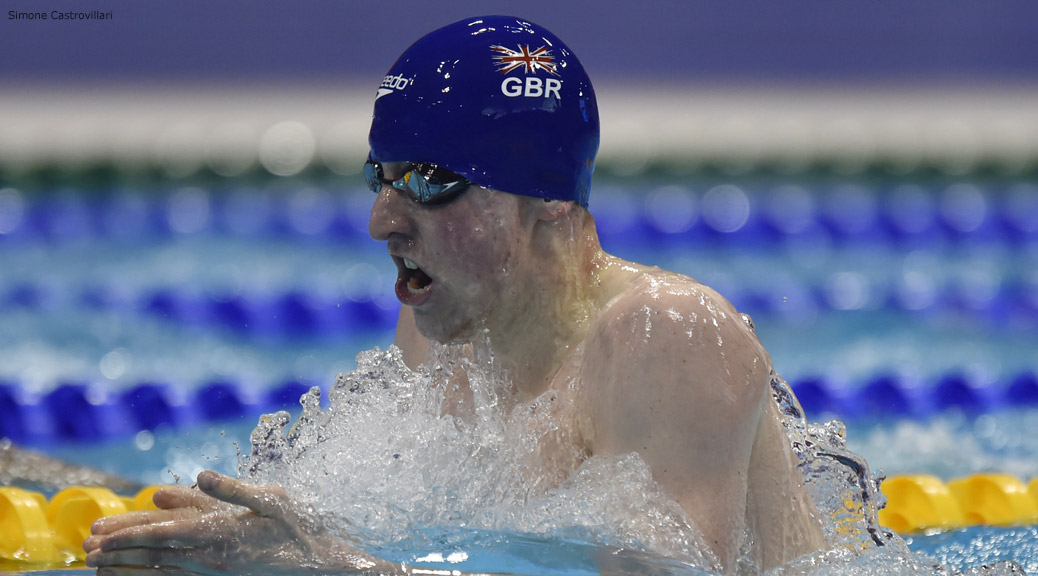 It’s one of the toughest events on the programme, but asked why people swim the 400IM, Max Litchfield laughs but can’t come up with an answer “I don’t know really, it’s just what I’m good at!” But he does acknowledge the wider appeal. “It’s one of those races that’s always interesting to watch from a spectator point of view. It’s always interesting to be in the race and to see the changes as it’s being played out”

Litchfield, who trains under Russ Barber at City of Sheffield, will see how it pans out on August 6th, the first day of competition in the Olympic pool, having secured his place in the event with a win at Britain’s Olympic trials back in March. To many observers, who had their eyes on a battle between defending British champions Roberto Pavoni and 2014 Commonwealth Champion Dan Wallace for the Olympic spots, it may have come as a surprise, but perhaps predictably, Litchfield doesn’t see it that way.

“I’ve been swimming quite well for the last couple of years since I moved to Sheffield so I knew I could put that swim together” he says. “It was just a matter of getting everything right on the day and kind of putting it in place. So I was probably not surprised, but of course very happy, to make the team”

The swim he put together was enough to get him under the automatic qualifying time, his 4:12.05 victory representing almost a three second improvement on his lifetime best from 2014’s European championships. “It was a big drop but I went 4.14 high in Berlin, at the Europeans two years ago now, and that was kind of a big drop, but I’d not made an improvement last year because I had an unfortunate DQ in the world championship trials and then didn’t manage move it on at World Uni Games” he explains. “I’d been putting in good heat swims and then I hadn’t been able to put a big drop down for the finals, and that’s what I did well in Glasgow I think. I put a decent heat swim together and made it back, and it was just about putting everything right in that final and that’s when it came together really.”

It will all need to come together in Rio in an event that will be fiercely competitive, but Litchfield is adamant that he can mix it on the global stage. “I think if I can get somewhere near a season’s best time in the heats, sort of 4:11-4:12ish, I think that’s going to be near the final, but it’s not a matter of making the final, it’s a matter of trying to make the final and then push on for medals. It’s going to take me another big drop to get a medal but hopefully I can put that swim together with the improvements I’ve made recently and hopefully get in with the medals.”

What might those improvements consist of? A recent change to spend more time reviewing his races has been a contributor to date and could help more on the way into the Games. “I’m not going to lie, a few years back I probably didn’t watch them at all, but since I’ve been involved with the British team, I’ve had more opportunity to watch the videos. It’s been something I’ve loved to do; you just kind of finish the race and then instead of going off what the coach says or what you thought happened, you can actually see what’s gone on and you can look at how you can improve and move forward.”

His turns remain something that video analysis is helping him with. “It’s finishing off the little bits I need to put right, I’ve done a lot of work recently from trials on my turn skills and things like that; that was one thing that was highlighted from trials. I think I lost a couple of seconds on one turn to the best in the world! That was something that we really needed to put right.” Not that changing such ingrained skills comes easily.

“I’ve done that sort of turn for years, for my whole life. And when I actually look at the video and analyse it, I see how I’m doing a certain thing and I’m like, that’s not what I’m doing, that’s wrong, you’ve tampered with the video! But your brain learns what you think you’re doing and with the amount of times you do it just becomes an automatic thing. We look at the videos and we’ll go back and we’ll write down the specific points that we need to work on and then it’s just a matter of focusing every day and making sure that every turn you do is that way and then your brain will learn that is normal and it becomes something that will just be automatic when you get to race mode.”

Doing things automatically is a skill that’s vital in the maelstrom of Olympic competition, but Litchfield maintains he won’t get overawed by that environment. “I try to keep myself level headed and try to keep on the down low and just kind of get on with what I need to get on with really. And as I say, hit the skills properly and hit everything that I need to do and I can do and try to forget about what everyone else is doing.” Hopefully what he’ll be doing is swimming into the 400IM final in Rio.