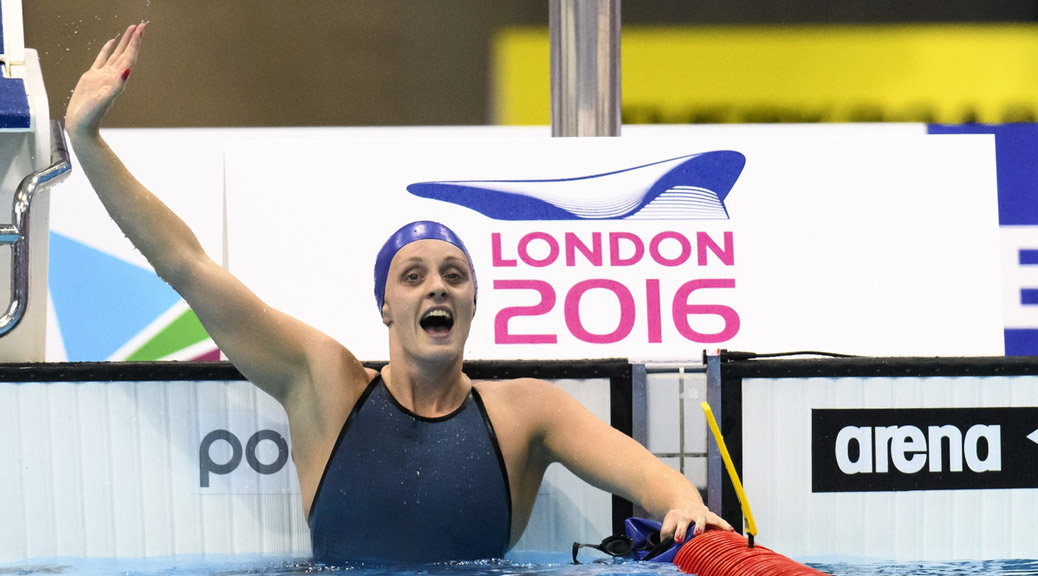 So some extent it was the meet that didn’t matter. At least that was the message that kept coming out of the British Swimming camp before racing commenced in the London Aquatic Centre at the European Championships. It was all about training through, racing tough and practicing the process not the outcome.

Well that thought seems to have lasted about as long as James Guy’s seemingly disinterested heat of the 400 free, raced in briefs and a beard, and a final spot not even close. It’s not a good look for the home nation at a major championship, even if the main focus remains on the Olympic Games. And day 2 of the meet duly brought a hatful of medals leading a wave that Britain rode for the rest of the championships to leave them with 7 Gold, 6 Silver and 9 Bronze; 22 medals overall just 2 shy of their blockbusting performance in Berlin two years ago and the most won in the pool, behind only Italy and table toppers Hungry on gold medal count in the final standings.

Those golds came, naturally, from Adam Peaty who simply cannot swim slowly, Ross Murdoch, Francesca Halsall, and three medley relays (two of which owed a big debt to Peaty as well). In his 100m and 50m breaststroke individuals, Peaty was peerless, refusing to be beaten and swimming times tht nobody else has even gotten close to. Ever. He could hardly have sent a bigger message to his Olympic rivals if he’s turned up in their pool and told them face to face he intended to beat them in Rio. His contributions to the mixed and mens’ medley relays were also game changing. Nobody else n Europe has anyone who can live with him.

In the men’s race he turned a deficit of a few tenths at the changeover into a 2 second lead, despite someone appearing to drop a grand piano on him with a few metres left; it must give his teammates a massive lift. It’s worth noting though that while Adam blew each race apart, it still needed finishing and Siobhan Marie O’Connor and Halsall in the mixed, and James Guy and Duncan Scott in the mens’ closed them out with aplomb. In the mens’ race Guy’s 51.69 was only marginally off the time he produced in Kazan, while Scott anchored with a 48.15 and a huge dose of maturity, while being chased hard by Florent Manoudou.

In the women’s race, a quick look at the team lists suggested that gold was on but the girls delivered it with style. Kathleen Dawson, the find of the week as far as GB is concerned, gave them the lead at the first change and they were never headed as Chloe Tutton and O’Connor also posted the fastest splits of the race to hand Francesca Halsall a commanding lead on the anchor. Job done.

Dawson had the meet of her dreams, breaking the minute in the 100 back for the first time and collecting bronze in that event to go with her relay triumph. Of course that success inevitably reopens arguments about Olympic selection and why she isn’t going to Rio. The answer of course is that she was 5th at trials and didn’t show this kind of form. It seem impossible that she can go to the Olympics now, but if nothing else, her success vindicated the decision to bring young swimmers into the meet for experience.

A further breaststroke gold was delivered by Ross Murdoch who turned the tables on his nemesis from Berlin ’14, world champion Marco Koch, to take a deserved victory in the 200m. He won’t swim that event in Rio barring a selection switch, and it’s hard to read too much into the form of those who will, Andrew Willis and Craig Benson, given they looked as though they were at a different level of preparation. But Murdoch showed he can also be a force in the 100m which he will contest in August; silver behind Peaty there and a full house of medals completed in the 50m with Bronze, show he’s in good shape to challenge for the podium in the shorter event. Will the selectors stick or twist? Only time will tell.

In the equivalent women’s events, there was plenty of encouragement for Britain, with Chloe Tutton and Molly Renshaw setting PB’s and Tutton taking bronze over 100m. Elsewhere, Halsall added silver in the 50 free behind Ranomi Kromowidjojo, bronze in the 50 fly and retained her 50m backstroke title, ahead of Georgia Davies in bronze medal position, for a personal haul of five medals. She looked relaxed all week and the results came. So too Jazz Carlin, who took silver in the 800 free and added a second runner-up spot in the 400, her 4:04.85 a fast time at this point of the year. Both ladies will face tough challenges in Rio, but they appear to be on the right path.

Ben Proud took confidence boosting bronze medals in the 50 fly and free, the latter from the lane next to defending Olympic champion Manaudou should give him further belief he belongs at this level, while the medley ladies O’Connor and Hannah Miley added three more medals between them, while at the same time being reminded that Katinka Hosszu will be just as tough to beat in the summer as she has ever been.

Beyond the medals there was further encouragement; Max Litchfield swam well in the 400 IM, while Tim Shuttleworth set an English record over 800m and swam his best heat ever in the 1500m. These young men have a lot to learn this summer, but look comfortable at this senior international level.

One medal hope that maybe took a bit of a hit was the men’s 4 x 200 free. Sixth in their final, with only James Guy showing the kind of pace that will be needed if they are to mount the Oympic podium. His battling bronze in the individual event showed he remains a contender later in the year, but it was a relay reality check for all concerned. Certainly they will need to convert the 1:48’s and 1:47’s to 1:46’s or quicker in Rio if they are to have any chance. The selectors gave themselves plenty of options by selecting seven men, but as it stands it seems that they can ill afford to rest anyone in the heats to be sure of making the final. Certainly Dan Wallace cut a forlorn figure this week – hopefully a change of training venue to Millfield can reinvigorate him – while Cameron Kurle was well down on his best in the 200 free heats, a result which could, unfairly, put a question mark in the minds of the coaches. Still there is plenty of swimming to do between now and then, and the team should not be written off just yet.

So not a bad week’s work all told, given we were told, repeatedly, that the team were in heavy training. Some appeared to be more rested than others and it was clear that some shaved down as the week went on, with medals in mind. But whatever condition this is a result that will do the team’s confidence no harm for the Olympics, and one which suggests that the big hopes are travelling along the right road.