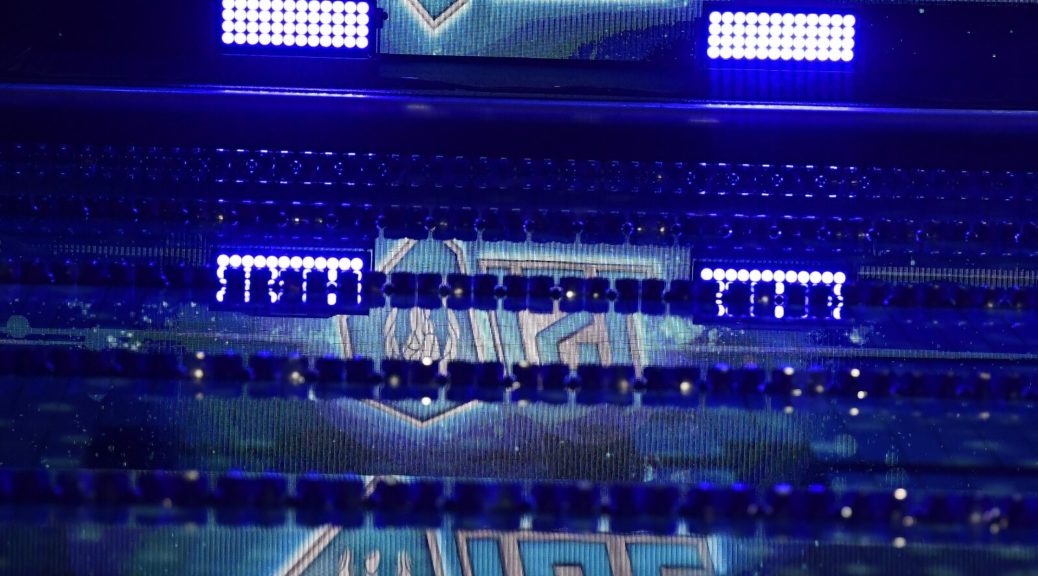 It was trailed as the future of the sport of swimming. It was fast, it was furious and the graphics seemed to have been lifted directly from sci-fi knockabout Tron. The athletes definitely seemed to enjoy it, but after the inaugural weekend of the International Swimming League has the swimming world shifted on its axis?

There was certainly a lot to like about the event, with the presentation being unlike anything that has come before and the headline grabbing returns to the pool of Olympic champions Natalie Coughlin and Florent Manaudou adding a sprinkling of stardust to four teams that brought together a host of the sport’s superstars.

But as it pushes against this brave new frontier, it’s clear that the ISL in the form shown in Indianapolis still has some work to do. Some things can be put down to teething problems, like the wrong logo appearing next to some of the teams in the on screen graphics on the first day, and the incorrect head shots accompanying some swimmer profiles. Other areas may need a bit more thought.

For this viewer, while keeping the pace up was an admirable aim, it meant there as no time to absorb the result of one race before the next one started, and they were so crammed together that the swimmer introductions were missed. It’s almost as though the league had decided that sessions should be 2 hours long but then tried to cram 3 hours of swimming into them. Certainly the programme could do with looking at again – it’s quite slanted towards sprint events and the wisdom of packing almost an entire world championship programme into 4 hours could be questioned.

However, the positive thing to emerge was the willingness of the organisers to react to comments and to things that didn’t go so well and change them during the meet. We can hence hope to see the presentation improve over this debut season, even if the programme is unlikely to change to ensure consistency of competition.

There was much gnashing of teeth on twitter about the absence of times – while an emphasis on the racing is quite understandable (albeit the lane assignments often meant that the racing lost its head-to-head appeal) those who have followed the sport still want to know what the times were, especially when swimmers are having points deducted for not meeting time standards. And that leads neatly into another issue for the armchair watcher – it was just too hard to follow what was going on with the meet, not helped by the team points ticker being half off the bottom of the screen. There were MVP points, and points deductions, and double and triple points for relays and skins, and team substitutions, but not enough time for any of that narrative to be explained so, for example, fans could understand why it was important that Cali picked up a 4th place instead of finishing fifth. The big rush also meant we didn’t hear enough from the coaches and swimmers.

As for the meet,  Energy Standard seemed to have identified the imbalance in the programme slightly better than the others in their team selection, since they were generally off the sharp end of pace in the longer events and yet still walked away as clear winners having hoovered up points in the fast twitch events.

Katy Ledecky swam the second fastest SC 400m free in history but her DC Trident team was otherwise off the pace, with the Cali Condors the only ones to threaten the Energy dominance, led by a breaststroke clean sweep from Lily King. Rome’s Aqua Centurions had a tough weekend, coming home in 4th place.

The same four teams will meet again next week in Naples, but there will be a shuffling of squads to suit availability, and no doubt a better understanding from the coaches of how this competition works. Cali in particular will be boosted by the addition of Caeleb Dressel to their ranks, while perhaps other teams will tweak their squads to follow Energy’s lead.

Promising first steps then for the ISL, and while this assessment may seem to be highlighting more negatives than positives, it’s only because the potential on show was huge and it could deliver something truly exciting if the kinks are ironed out. Certainly as a British fan I’m looking forward to cheering on the London Roar when they open their account in a few weeks’ time.