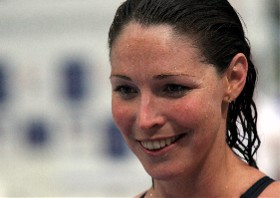 Australian Olympic swimming gold medallist Giaan Rooney has announced her retirement from competition.
Having won the 200m freestyle world title in Fukuoka in 2001, she successfully reinvented herself as a backstroke swimmer with coach Ian Pope. That transformation came to a head in 2005 when she took the world title over 50m in Montreal. The year before she was part of the gold medal winning medley relay team in Athens, but lost that spot to Sophie Edington in Melbourne.
Rooney won two silver medals in at the Commonwealth Games being touched out by Edington in her trademark 50m backstroke, when a poor finish probably cost her the title and possibly a world record. The Melbourne based swimmer will now pursue a career in television presenting.