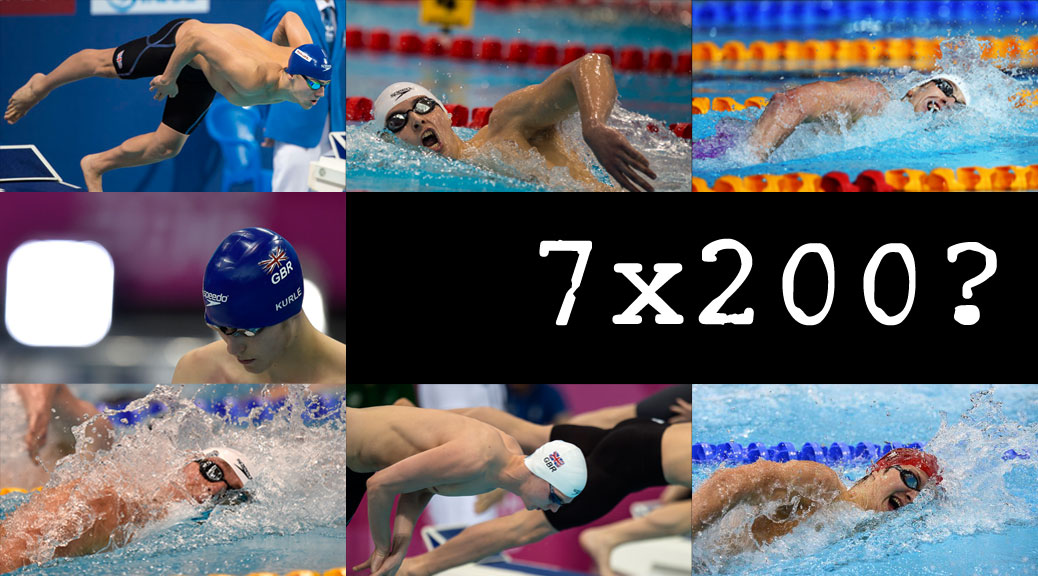 It was the event at the British Championships with possibly the most expectation, and in the end by virtue of its relay implications the men’s 200m freestyle the only one that raised any significant disquiet in terms of the Olympic team selection. Mindful that they were taking the world champion men’s 4 x 200 freestyle relay to Rio, Britain’s selectors opted to to keep their options wide open, selecting no fewer than seven swimmers for that squad from which to perm a team of four.

That meant the first seven finishers at trials in Glasgow got their plane tickets to Rio. The top four, James Guy, Stephen Milne, Robbie Renwick and Duncan Scott were inked in as soon as they touched the timing pads, but there’s little doubt that Dan Wallace in seventh was fortunate to have been selected on the basis of his performance at trials where he fell well below his own very high standards. It was those high standards, in particular his performances in Kazan where he split 1:46.04 in the heats before leading off the final in 1:47.04, combined with his NCAA relay know-how that appear to have gotten him the nod, with a hope that he can return to his best in time for Rio. Picking him then seems to have led to fifth and sixth placed finishers Cameron Kurle and Ieuan Lloyd also being added to the expanded squad. Both swam well in Glasgow, particularly Kurle who set a lifetime best in the final, but a number of questions about what the team strategy would be came instantly to the fore.

In previous years it would simply have been a case of taking seven swimmers and picking the best 4 or 5 to swim the heats and finals depending on form at the time, the others then being surplus to requirements. However that’s not the case this year, where in an attempt to keep numbers down, a new rule means that “relay only” swimmers must swim or the team faces disqualification. How Britain approaches this will be instructive, but first we need to consider what the heat strategy might be.

It’s clear that James Guy will be in the team that swims the final. Barring injury or illness catastrophe, it would be folly of the highest order for him not to do so. The question must be whether he swims in the heats, or if Britain can afford to leave him out. Looking back at recent global championships, the 8th placed qualification time has varied between 7:13.37 in 2013 to 7:10.92 in Kazan last year. As might be expected, in London in 2012 the 8th placed time was just under 2s seconds quicker than in Barcelona the year before; assuming a similar rate of improvement we might see a time of 7:09 low to make the final in Rio.

Taking the results from trials and lifetime best performances, but neglecting any contribution from takeovers, it can be seen that the coaches, led by Millfield’s Jol Finck, have options depending on how close they want to cut it (see below). The most likely scenario remains that Guy sits out the heats and the next four fastest swim the heat, with the slowest dropping out for the final. The names might change around based on form at the holding camp, but a strategy which sees two swimmers rested from the heats would appear to be a bigger risk than is perhaps desirable.

So if we take that as our expected strategy, that leaves at least two swimmers who will not get a relay swim. Since only Milne and Guy guaranteed themselves individual events at trials, at least one swimmer would hence fall foul of the relay-only swimmer rule. To mitigate against disqualification, therefore, the five swimmers without individual swims already should be expected to be given individual events in Rio. The table below shows events where those five have either FINA A or B times from the qualifying period, which takes in last year’s world championships. With FINA A times, Britain can enter two swimmers in each event, with a B time only one athlete can swim.

There are no GB spaces remaining in the 400 free and 200m breaststroke so those events are immediately out, but there are still options remaining. Entries at Europeans and in other meets since suggest that Lloyd and Wallace will swim the 200 IM, and Wallace may also get a 400IM spot. Duncan Scott will probably get a swim in the 100 freestyle individual, which leaves only Robbie Renwick and Cameron Kurle to consider. Renwick has long said his priority is relays, so he may yet be the sole relay-only swimmer in Rio. That makes some sense as it seems unlikely the coaches would want to go without his reliability and Olympic experience in the heats at least, and it opens the way for Kurle to be given an individual berth in the 200m freestyle. If Renwick needs to have an individual swim, then we might just see him in the 100 freestyle with Scott shunted across to the 200m fly – an event he did swim at Scottish nationals after all. Watch this space.

By way of contrast, a similar situation is likely to unfold on the women’s side, albeit with three swimmers selected only for the relay it is less acute. This one will come down to whether the selectors feel they can make the final with the foursome picked from trials or if they need to draft in Siobhan-Marie O’Connor or perhaps Hannah Miley to the heats to be sure of qualification. To deal with the relay-only rule, that probably then means Georgia Coates and Eleanor Faulkner swimming the individual 200m free and Camilla Hattersley getting a shot in the 800m.

But returning to the men, and whatever the selection machinations, the aim will be to get the best quartet a lane in the final. We may be some way off knowing who they are, but there’s little doubt that the team faces a tough fight for the podium. The US and Australian trials have shown that both should be significantly stronger this year than last, while Japan are an emerging force and France, Italy and Belgium cannot be counted out. To be in contention Britain will need Guy at his very best and the rest of the team to be at the top of their game, so the selection approach takes on great importance.