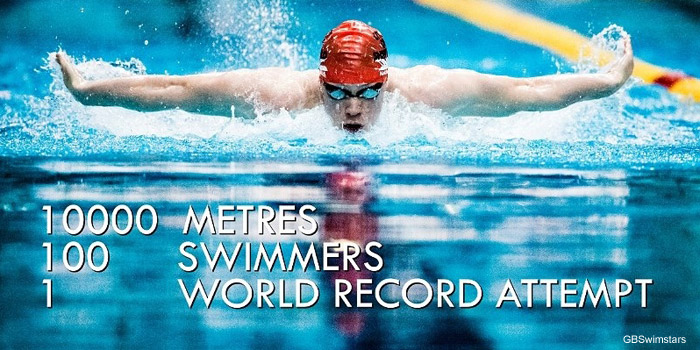 Cancer is something that touches many people’s lives and changes them dramatically. Often it inspires people to raise money for charities that deal in research or care for sufferers either in memory of lost loved ones or so that others too can benefit from the latest treatments. Often this might involve running a marathon or completing an open water swim or similar, but for GB swimmer Lewis Coleman that simply wasn’t enough – he wants to set a world record.

It all started when Lewis’ mum Mags was diagnosed with acute lymphoblastic leukaemia. An unsuccessful course of chemotherapy was followed by a lifeline – a chance to participate in a trial for a new treatment Blinatumomab, which bought her a significant and life changing amount of time in the search for a bone marrow donor. Given that only 6% of cancer patients are lucky enough to receive cutting edge drugs such as this, Lewis was driven to raise money for the charity that had funded his mum’s trial, Leukaemia & Lymphoma Research.

As a member of the GB podium potential programme, swimming was the obvious choice, but what to do? A world record attempt was the answer with plans now afoot for an assault on the record for the 100 x 100 freestyle relay. “Swimming has always been a massive part of my life, with my mum having a massive part to play in me getting to the position that I am in today” Lewis says, “I thought it would be fitting if the event I organised was related to swimming and I’ve always loved a challenge!”

And quite a challenge it is. Swum short course, the current record stands at 1 hour 37 minutes and 53 seconds meaning that the team will have to average 58.7 for each leg. Taking place at Sheffield’s Ponds Forge pool on Saturday 1st February, the record attempt will be started by 10 year-old Oliver Coleman, Lewis’ brother, while Lewis himself will take the anchor leg to hopefully bring the team home to glory.

In between them will come 98 other swimmers drawn from the British national team both current and past and club swimmers around the country. Notable competitors include Olympic champion Becky Adlington, Olympic medallists Steve Parry and Michael Jamieson, world champions Mark Foster, Liam Tancock, James Hickman, Hannah Miley and Karen Pickering and around 30 more current and former GB internationals.

On the face of it with such a core of elite swimmers the record should prove reachable, but as ever a team is only as strong as it’s weakest link and it promises to be an exciting effort, and one that everyone is taking seriously.

If they can do it they will have bettered the effort of a tam at the Pizzey Park Sporting Complex in Miami, Queensland, Australia who set the current mark in 2011; the chance to put one over on Commonwealth rivals from down under an added bonus in the race to the record. But the day will be more than just a time trial with a series of swim clinics and other fundraising events planned around the main event, all with the aim of reaching a £100,000 fundraising target.

However, while the swimmers battle against the clock, Mags’ battle against her illness continues. Hopefully the money raised by the event can give others the same second chance that she got.

The record attempt takes place on Saturday 1st February at 3:15pm with clinics and other events beforehand. To find out more about the event and to buy tickets for the relay or swim clinics visit the Swim4Leukaemia website. You can also donate directly here. To find out more about leukaemia research see http://leukaemialymphomaresearch.org.uk/