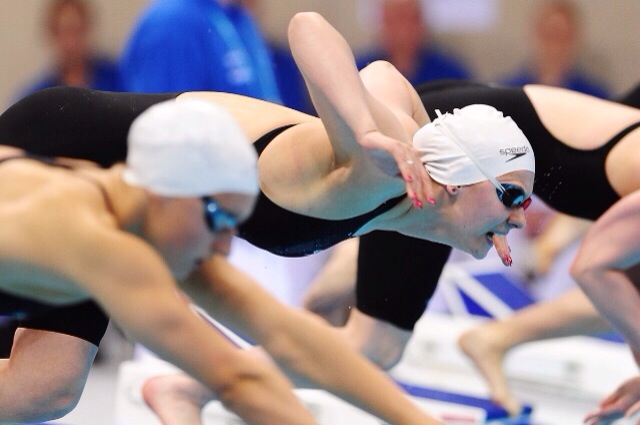 Make hay while the sun shines goes the old adage, and that is exactly what the British team of 46 swimmers at the Flanders cup in Antwerp did, pocketing a huge medal haul and filling finals spots like it had gone out of fashion.

But any celebration of the results, in place term at least, needs to be tempered by the quality of the competition; certainly the start lists gave lie to the pre-meet assertion from Bill Furniss that Britain swimmers could test themselves against “some of the top swimmers in Europe” and would be “competing at a World Class level.” Sure the meet had some quality in the likes of Laszlo Cseh and Katinka Hosszu, again doing her superwoman impression with almost a full programme of events, but world class depth was lacking.

Not that that makes the whole exercise futile, far from it; the discipline that comes from competing in a GB team and the chance for domestic rivals to race tough making the trip a worthwhile endeavour and one that was rewarded with some encouraging times.

Key among those, and rewarded with swimmer of the meet laurels, was Aimee Wilmott who posted a medley clean sweep in a pair of huge lifetime bests. Fresh from altitude training in Sierra Nevada Wilmott erased her 2012 bests with 4:33.87 over 400m and 2:10.87 over 200m, the latter involving a very fast closing freestyle split and a successful final metre showdown with Hosszu.

Also going well were two ladies who recently moved training bases to Loughborough; Georgia Davies broke the 50m Backstroke British Record with a 27.90 effort and posted a solid 100m time while Molly Renshaw set an English record of 2:26.38 in the 200m Breaststroke having broken 1:10 in the 100 for the first time earlier in the meet.

Amongst the men, the pick of the bunch was Ross Murdoch, fresh from victory in Austin last week, who posted a 1:00.13 100m breaststroke and then set a Scottish record in the 50m breaststroke heats. Also of note were the performances of one of the podium potential squad, Nick Grainger and one from outside that group Luke Greenbank, who demolished their personal best times in the 1500 free and 200 backstroke respectively to take top spots in the medal placings.

And there were a lot of GB top spots secured, 25 in total, albeit they need to be seen in context. Nonetheless the team can leave Belgium with a job well done. Whether it means anything substantial will not be clear until trials in a few months time and tougher tests to come.