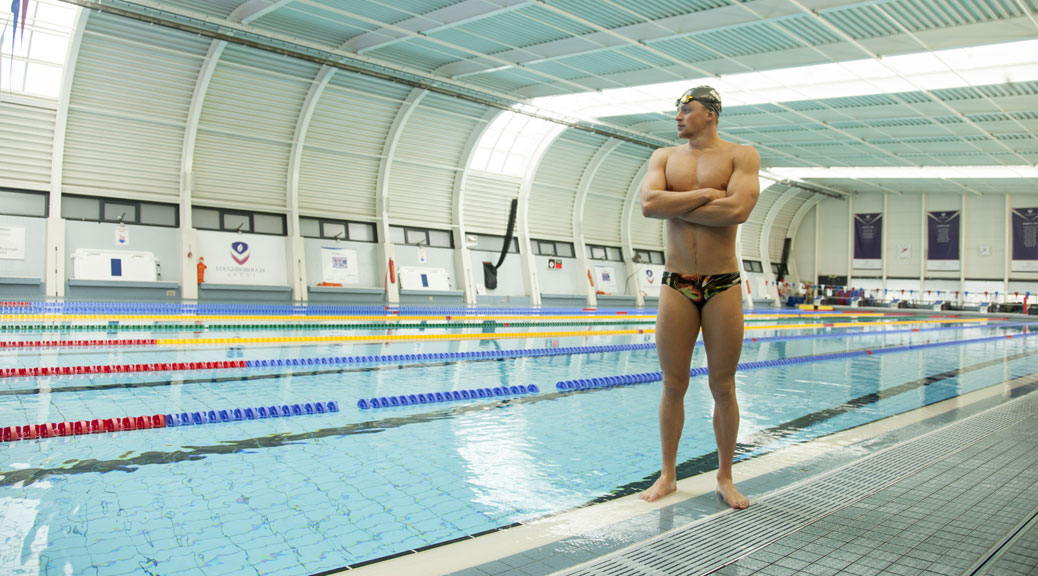 When you’re heading onto an Olympic games as probably one of your county’s best hopes of a gold medal, the pressure is undoubtedly intense. But in the case of Adam Peaty it’s a pressure he carries lightly on his not inconsiderable shoulders. With a shrug of those he remarks “I perform better under pressure, I perform better in the great atmosphere, and when the crowd is cheering your name I perform 100% better.”

That’s a useful trait to have in the cauldron of Olympic competition but it does help when you are the fastest man ever in your event by over half a second. So what does he say to those who are already hanging that medal around his neck in Rio? “I say it’s a confidence that people believe in me. It’s a fine line between confidence and arrogance and you know, I see that as a complete confidence boost, going into a meet where you are a world record holder” he says. “Like any meet people are always are going to be looking around at you that and they are always going to have that in the back of their mind.”

His relationship with his coach Mel Marshall is one way he keeps his feet on the ground as everyone builds up his chances around him. She has experienced the pressure that Peaty now feels; back in 2004 she went into the Games ranked number one in the world over 200m freestyle, and indeed finished the year still top of the rankings, but things didn’t go to plan in Athens. Not that she dwells too much on the experience says her charge. “She always has a good joke about that, people always rip her about it. That’s the person she is, she can always shrug it off and have a good laugh about it, but you know I think, I’m the in same situation I’m going in number one but, what’s the worst that could happen? It’s not like someone’s holding a gun at the end of the lane!” he laughs. “So I’ve got nothing to lose, I’m just going to give it a go, I’m going into my first Olympics whereas people I’m racing are going into their third, fourth, probably last Olympics so there’s more pressure on them to perform than on me. I’ve still got a whole future ahead of me.”

That ribbing is symptomatic of the close bond he has formed with Marshall. “I think it’s a very unique relationship not many coaches and swimmers benefit from. Mel and I can have a good laugh; seven years ago when I couldn’t drive she would drop me off at college after swimming and go through an hour of traffic just to get me there. That bond was formulated through those journeys, and not that many swimmers have that.

“We would just talk rubbish and then sometimes we would have a good chat about where we’re going, and I think she embedded an idea into me where I could believe in myself, that I would perform. I think those chats have been very beneficial to us. We can still have a good laugh before a race but once it’s game time we’re very professional and very a very efficient team.”

A day in the training life of Adam Peaty.
Photos courtesy of DFS – partners to Team GB. See more of Adam with DFS here

That efficiency runs into his preparations in the pool, the hours spent honing his technique or building his strength to ensure he can bring the race home in the customary fast manner he has shown over the past two seasons. “My fitness is in the best place it’s ever been and my stroke, even Mel says it looks absolutely beautiful. I think I can agree with that because it feels so natural at the moment and hopefully that’s going to improve and sharpen up for Rio”

One area he’s questioned about repeatedly is his start. While his reaction to the gun is up there with the best, he seems to drop off through the underwater phase. While he undoubtedly spends many hours working on it, it’s not something that has him unduly worried. But if he got his starts right then his races might be a procession? He grins at the thought. “It’d be boring then though wouldn’t it?

“I mean that’s the world of sports, people have their cons and people have their pros. My pro is the swimming; I’m one of the fastest in the water and that’s my huge strength and no one can take that away from me. But obviously people have also got pros on me and Cameron [van der Burgh, the defending Olympic Champion] can take a lot off the dive. So I’ve pulled completely my dive apart, started again and refreshed it, and it’s getting to that point where it’s starting to get a nice flow with it. As long as I can not lose as much ground on the dive and leave less to my swimming to catch up, I’m happy.”

But once out of the start phase it all clicks into place naturally he says. “The swimming is so easy mentally for me, I get annoyed at my start because it’s like a wall, a barrier where I can’t break it down but I’ve got to remember that I’m only 21 and people who are taking distance out of me just from the first 15 meters are 28, 27. They’ve got all that experience”

It’s experience that Peaty will add to his armoury in Rio and then onwards. But he’s clear that whatever happens at the Olympics, he isn’t done there. “I want to be keeping on improving each year and it would be a bit boring if I hit all my good times now or my best time in the world now, where I’ve got nothing left for the future.” What would not be boring would be an Olympic gold medal in a trophy cabinet at home.