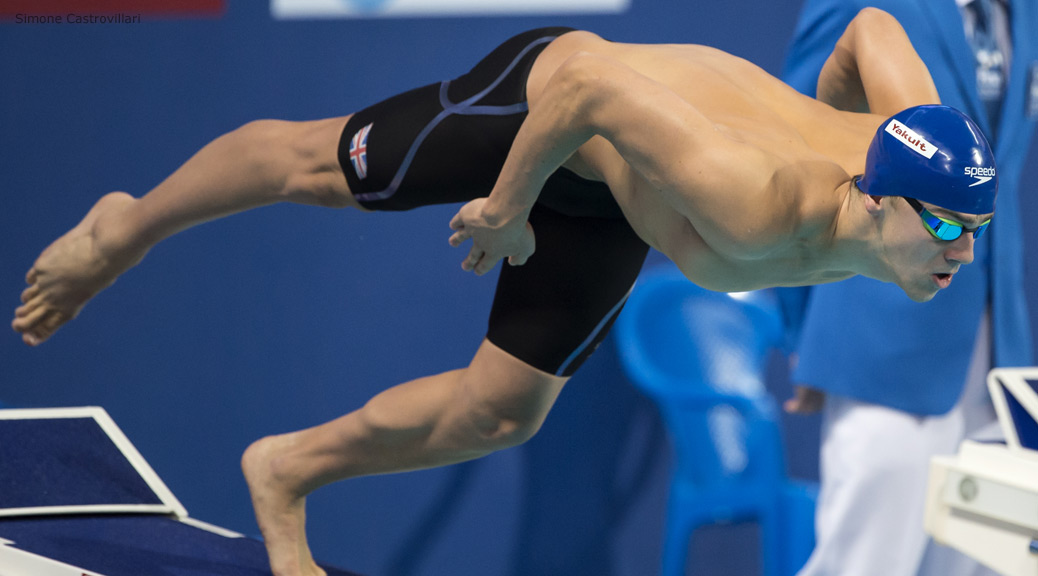 The British Swimming Championships are underway in Glasgow, for a competition that will determine who makes the Olynpic team for Rio later this year. As in previous years we’ll be keeping tabs of how the team is shaping up based on the results and the British selection policy.

Note this is only our interpretation of how the policy will be applied. Beyond those who make the automatic qualifying times, selection is not an exact science and subject to selector discretion. The final team selected may hence differ for a variety of reasons and is due to be announced on Thursday 21st April.

After the highs of Saturday, the lows of Sunday. The first three finals failed to deliver any Olympic qualifiers as Siobhan-Marie O’Connor won the 100 breaststroke in a PB, Luke Greenbank won the 200 backstroke and Alys Thomas took a surprise win in the 100 fly. But the men saved the best till last in the 200 freestyle shoot out. James Guy won in commanding fashion in 1:45.19, just outside his British Record, but all 8 men were sub 1:49 and the first 5 were under 1:48. Stephen Milne, Robbie Renwick and Duncan Scott came home in Guy’s wake, and put themselves in pole position for the 4×200 relay, but 5th placed Cameron Kurle’s 1:47.82, a PB, could see him also picked.

A much better night in Glasgow – Jazz Carlin secured her Olympic place in the 400m freestyle, and was joined by Ben Proud and Siobhan-Marie O’Connor in the 50m freestyle and 200Im respectively. The big story though was Tim Shuttleworth who crushed his lifetime best to fall agonisingly short of the 1500m qualifying time, just .12s adrift after 30 lengths of Tollcross. He stands an excellent chance of selection though, as does runner up Stephen Milne who was inside the 2% selection cut off.

Andrew Willis turned on the style to set another PB and secure his place in Rio in the 200m breaststroke, only th 5th person to be certain of a place on the plane . Behind him, Craig Benson upset his Scottish teammate Ross Murdoch for second and a time well inside the 2% consideration cut off; it looks as though he is Brazil bound also. James Guy won the 100 fly, not quickly enough for individual selection, but with enough gas to ensure the men’s medley team can be considered for the Olympics. Meanwhile the women’s events didn’t yield any Olympians; Siobhan-Marie O’Connor bested Francesca Halsall in the 100 free, and Lizzie Simmmonds dominated the 200 back, but both finished outside the 2% selection cut off.

After a barren night on day 2 in Glasgow, Max Litchfield of City of Sheffield inked his name into the British Olympic team with a surprise win in the 400IM, posting a time of 4:12.05 to sneak under the automatic qualifying time. That swim carved almost 3 seconds off his lifetime best. Litchfield was the only swimmer to be certain of an Olympic spot but Francesca Halsall is at least in the running having won the 50m freestyle in 24.43. That was outside the automatic cut but within the 2% consideration zone; at this halfway point, indications are that everyone inside the 2% mark will be selected, unless the overall team size is reduced. The biggest shock of the meet so far, was the failure of Jazz Carlin to secure her spot; that she swam outside the automatic time in the 800 free was surprise enough, but to also miss the 2% cut off was almost unthinkable. She at least has another chance in the 400 free. Perhaps less surprisingly there were no qualifiers in the men’s 100 free, despite a storming victory for Duncan Scott in a PB 48.66, or the women’s 200m butterfly won by Aimee Wilmott but at 2:08.82, well shy of a selection standard. The cumulative time of the first 4 finishers in the men’s freestyle put them well shy of selection so barring some creative maths with splits from Kazan, it looks extremely unlikely that team will be selected directly. It could still swim of course if four suitable men find their way onto the team by other means.

Chloe Tutton is taken aback by her time in the 200m breaststroke, a performance that surely has secured her place in Rio.

The women’s 200m breaststroker’s were the stars of the show on night 2 in Glasgow in a set of finals that did not yield any direct qualifiers. Chloe Tutton set a British record of 2:22.34 for the win, narrowly missing automatic qualification, while Molly Renshaw was runner up in a PB of 2:23.56. It will be a surprise if both of them don’t make the trip to Brazil. In the 100m backstroke events, Georgia Davies put herself into contention with a win in 59.64, just outside her lifetime best, but Chris Walker-Hebborn will now be reliant on the men’s medley relay after he finished outside the 2% cut off. As expected there was no Olympic qualifier in the men’s 200m butterfly, where Swansea’s Adam Mallet took the win.

James Guy, Adam Peaty and Hannah Miley pinched their tickets for Rio on the first night in Glasgow. Aimee Wilmott and Stephen Milne also put themselves in the frame by racing inside the 2% cut off, while the women’s 4x200m freestyle team should also be in the selection shake up, despite nobody managing individual qualification. Given the quality of his swim, it would be a significant surprise if Murdoch does not make the plane. He also still ah the 200m to cement his Olympic place later in the week.

38 thoughts on “Off to Rio – GB’s Olympic Selection Tracker”