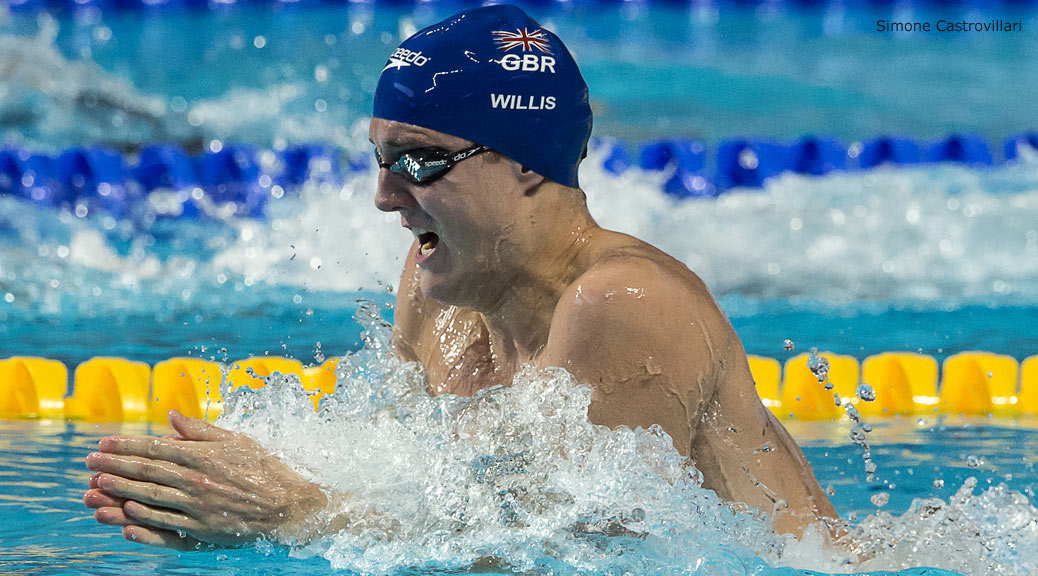 If there were medals for consistency than you would do well not to look too further than the career record of Andrew Willis. Since making his senior international debut at the 2010 Commonwealth Games, he has contested the final of the 200m breaststroke at every international meet he has attended both long and short course, including two fourth places at the World Championships.

It was a run that came to an end at the European Championships this year, but even then only just, with a 9th placed finish and an exit based on the two per nation rule, but that was purely down to a single minded focus on the more important events that will unfold this summer. London was a means not the end; the end comes in Rio when Willis will seek to convert those 4th places to a podium finish. “I’m focussing on making sure that I put myself in that final again and that I don’t come away thinking I could have done more” he says.

In training “doing more” has become easier this year with the completion of his chemical engineering degree at Bath University, freeing up valuable training time. “It’s definitely been easier but at the same time it’s felt harder” he explains. “I mean, this year with no other commitments I’ve just upped my game completely in every aspect of swimming, whether be in the water, out of the water, I’ve been working on lots of aspects on the land, that would complement me in the water technically, the gym, nutrition, everything really. This year for me as an athlete has just been amazing”

With the physical changes, has come an increasing focus on the mental side of racing. “This year I’ve been tying it a lot to the psychology side as well because, I just try to do everything I can to make sure that I’m perfecting my race and the tactics” he explains. “I’ve completely broken the race down and completely tied it to my mental and psychology, cues, what I need to be doing in my race plan, and tying that into hitting the right stroke rates, not going out too hard, going out feeling comfortable.”

Focusing in his own lane was a skill that was vital at Britain’s Olympic trials when in the final of the 200m, Adam Peaty set off at a furious pace, having already decided he wasn’t going to pursue that event in Rio. It was a situation that could have easily put his competitors off, and may well have affected Ross Murdoch’s swim. For Willis though it was just a case of letting Peaty the hare go and catching him through the latter stages. “I remember seeing Adam on the first 50 miles in front of me and I just said to myself just catch him down the third length and put enough distance into him” is his recollection, drawing also on his experiences in the Olympic final in London 4 years ago.

“I’ve watched that back quite a few times over the last year. I remember, like it was yesterday, Kitajima going out really hard in that race and to me it felt like he was miles in front. But he wasn’t and I was in the race and I just spent too much energy chasing.” Holding back was a plan that worked out perfectly, in Glasgow bringing him home for a win and a guaranteed spot on the plane to Rio for his second Olympics.

Beyond the results Willis says there were positives to take away from Glasgow – “I took five or six less strokes in total. I mean, my stroke has just become much more efficient now” – but that it wasn’t his perfect swim, with plenty still to work on. “I’ve looked back at my race, completely analysed it and there’s a few areas” he says, without going into the specifics, but he knows he will have to find those improvements to get into the 2:07 range that will be needed for the podium.

“If I can do that, that’s going to put me right up there” he acknowledges, before returning to the theme of consistency. “Nothing much needs to change, I just need to make sure I hold my nerve and do what I’ve been doing. “