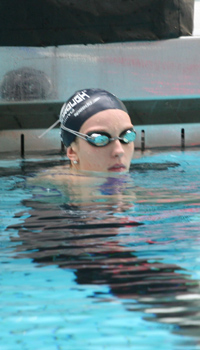 It was hardly a vintage year for British Swimming, but there were still performances to be savoured. In the continued absence of the Splash Awards, we present once again the Splosh awards. The prevalence of youth amongst the winners demonstrates an encouraging trend for 2014, so without further ado here are the winners. Let us know what you think on Twitter.

Female swimmer of the year – Fran Halsall
Despite strong showings from Siobhan Marie O’Connor and Sophie Allen both in Barcelona and during the short course season, the latter setting records like it was going out of fashion during the Duel in the Pool, there could be only one be one winner in this category – the swimmer who single-handedly stopped Britain’s showing at the Barcelona World Championships from being a complete wash out.

The 50m freestyle bronze medal won by Fran Halsall in the 50m freestyle, not only avoided a British whitewash, but was something of a catharsis after a troubled 2012. A year spent focussing on the sprint event first with coach Ian Hulme then latterly with James Gibson bore fruit, while her performances at the Duel in the Pool showed she retains her racing instinct. 2014 is now a year of promise for her.

Male swimmer of the year – James Guy
There was no obviously stand out performance in the men’s ranks in 2013, but there were a clutch of excellent performances across the year. Michael Jamieson proved he is still a force to be reckoned with on the world stage, despite his injury affected showing in Barcelona, with a Commonwealth Record in the 200m breaststroke short course and a string of strong showings on the world cup circuit. Meanwhile there were excellent world championship debuts for Dan Wallace and Craig McNally, but the performance of the year was another debutant; Millfield’s James Guy.

Guy had quite a season, including individual medals at European and World Junior levels and an appearance in the final of the World Championship 400m freestyle, where he placed 5th, far beyond expectations leading into the event. He also produced an incredible anchor leg for the 4 x 200m freestyle relay in Dubai to secure world junior gold for the GB team. The challenge will be to move on in 2014 now that expectations have been raised and he can no longer swim under the radar. All signs are that he can do this and his potential showdown with hometown favourite Robbie Renwick in Glasgow, as well as the best of the Commonwealth, is mouth-watering.

Young athlete of the year – Sophie Taylor
One swim was all it took for 17-year-old City of Leeds swimmer Sophie Taylor for the British swimming community to sit up and take notice. But it wasn’t the 100m breaststroke silver medal won in the World Junior Championships that was the reason, it was the time. Taylor broke the British record with a 1:07.36 in an event that Britain has long lagged behind the curve in terms of the world stage and the performance raised hopes around the UK. Breaststroke has a history of difficulty in moving from junior to senior ranks however, so Taylor faces a potentially difficult transition in 2014, but leaves behind a successful 2013.

Fifteen year old Amy Marren cites Ellie Simmonds amongst her inspirations, but 2013 was the year she moved into the status of inspirer, following a stellar showing at the IPC world championships in the S9 category. Marren returned from Montreal with 4 gold and 2 silver medals in her luggage after a hugely successful week and is fast becoming the swimmer to beat in her classification.

Diver of the year – Sarah Barrow
The standout performance in Barcelona came from Plymouth diver Sarah Barrow who recorded a personal best score and 4th place in the final of the 10m platform, missing bronze by just under 12 points. It was her second top 6 placing of the week, having secured 5th place in partnership with Tonia Couch in the 10m synchro event. The duo had earlier secured European Silver in the same event.

Waterpolo performance of the year – Matt Holland
One of 2 outstanding goalkeepers in the GB squad (Ed Scott of Manchester being the other) Matt Holland is currently playing professionally for Aix en Provence but hails from home club Sutton & Cheam. His performance against Russia in Euro Qualifiers kept GB in the game for 3 quarters and was the standout performance of 2013. Still only 24 and close to being world class, if GB qualify for the European championships via their playoff against Romania in February and March, he’ll have played a huge part.
Amongst the women, left hander Ciara Gibson Byrne’s 5 goals v Russia in December was a stand out for GB, but the women’s squad have had a difficult year, not winning a competitive game, while the men appear to have bounced back from their loss of UKSport funding to put themselves on the brink of European qualification.

Jenna Randall called time on her career in 2013, along with man of the GB synchro team, but she went out on a high, reaching four finals at the Barcelona World Championships, two in partnership with Olivia Federici, and equalling her best eve performance at that level. Randall is now plying her trade as part of the Cirque du Soleil troupe in Las Vegas, while a new generation of synchro swimmers prepares for the Commonwealth Games in 2014.

Open water swimmer of the year – Caleb Hughes & Alice Dearing
While Dan Fogg and Kerri-anne Payne toiled in Barcelona harbour, the next generation of open water swimmers were off winning medals at the European Junior Championships. Hughes showed great tactical nous to win silver while Dearing went one better to win gold.

Performance of the year – Jazz Carlin – 1500 free, British Trials
In a year lacking a singular highpoint it was the return to form of Jazz Carlin that provided a high-water mark in terms of performance. In addition to world class times over 400m and 800m freestyle, Carlin set down a huge marker, knocking 19 seconds off the British record for the 1500m in a time that makes her 6th all time in the event.

Inspiring club award – Plymouth Leander
2103 was quite a year for Plymouth Leander. 2013 Arena League National Champion and top boys squad at the British Gas National Age Group Championships as well as being the home of Ruta Meilutyte (see below) and Ben Proud, two swimmers who impressed in 2013, the latter erasing Mark Foster from the 50m fly record books. Led by head coach Jon Rudd, himself named coach of the year by the British Swimming Coaches Association, the club is in a strong position and looks set to send a number of swimmers to the Commonwealth Games.

Splosh star – Ruta Meilutyte
“If only we could claim her as ours” wad the familiar refrain as Plymouth and Lithuania’s Meilutyte put in another stellar year’s worth of work. In Barcelona, she set two world records in the 50m and 100m breaststroke taking gold in the latter and being narrowly pipped by Yulia Efimova in the former. Indeed the rivalry with the Russian has been a highlight of the year, with Meilutyte getting the better of her at the European Short Course Championships. We can all look forward to a renewal of hostilities in 2014 – often out of such rivalries come incredible performances.

Lifetime Achievement – Becky Adlington
February 2013 and the career of Britain’s most successful swimmer came to an end. It was a premature end some said, but Becky Adlington went out at the top of the sport, having delivered World, European and Commonwealth titles and an un-matched 4 Olympic medals, including of course those stunning two Golds from Beijing. Her 800m freestyle world record may have been downed in 2013 by Katie Ledecky but her legacy is still there for British Swimming and she remains a true great of the sport.