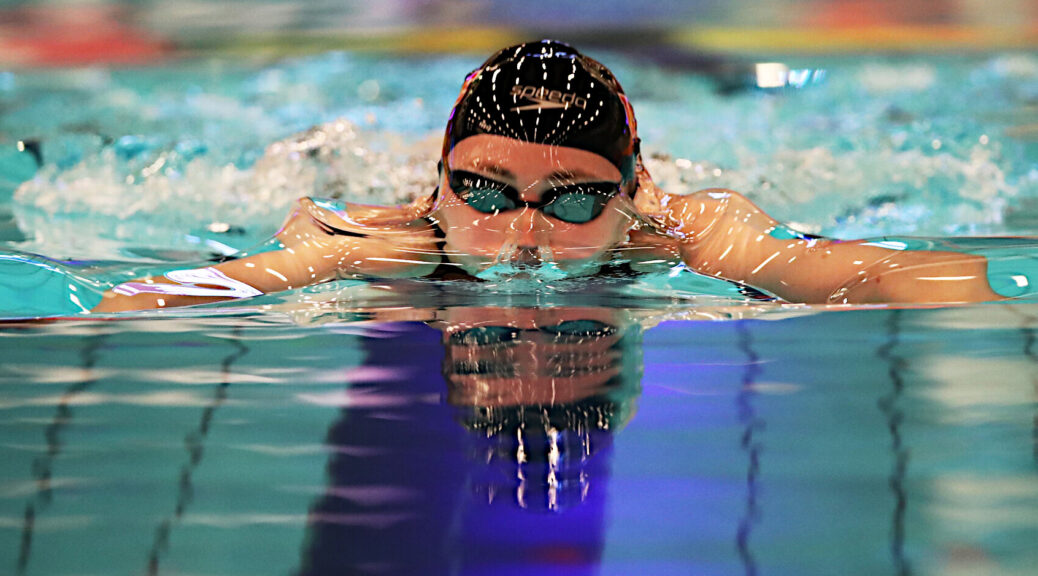 One of the beauties of Commonwealth Games year is that it opens the opportunities for many more swimmers to make their mark on the international stage courtesy of the home nations splitting up and the three per nation entry. This year may have the added carrot of a World Championships to aim for, but we’ve seen many of Britain’s finest take their first strokes in senior waters at the Commonwealth Games, including for example Duncan Scott and Adam Peaty in 2014, amongst many others. After a period of treading water for many through the pandemic, with training now back to all but normality the names below will surely not be the only ones to make a breakthrough, but here are 4 to keep an eye out for in Sheffield this week.

Hailing from the Outer Hebrides, Kara spent most of her formative swimming years training in a 12.5m pool before moving to Edinburgh at 18. The post pandemic period has seen a steady improvement in her breaststroke times, chipping away until at BUCS this year she removed one of Scotland’s finest, Kirsty Balfour, from the record books with a 1:07.64 blast over 100m for a new Scottish Record. That swim ranks her 10th all time in Great Britain, 6th amongst those in the water, and also nudges her under the required Commonwealth selection standard for Scotland. She currently sits just outside that mark in the 200m but again under in the 50m. To confirm her place in Birmingham it all needs doing again at the British Championships so she will no doubt be hoping to make it a triple selection in Sheffield.

Hanlon wasn’t the only swimmer in record setting mode at BUCS this year with Swansea’s Medi Harris also toppling a national icon by breaking Georgia Davies’ Welsh record over 100m backstroke. She improved that new mark further at the McCullagh International meet a week later to now sit number 3 all time for Britain in 59.24, a swim that all but confirms her on the Wales team for Birmingham where she also has a qualifying time for the 50m backstroke. This week then, the focus may be on making the step up to the GB team – she needs a 59.02 to throw her name into the ring for the World Championships and her match up with Scots pair Cassie Wild and the pre-selected Kathleen Dawson could produce fireworks

Although he had been an age group stand out, Lewis Burras first popped properly onto the GB swimming radar back in 2019 with a 48.57 100 free to win the US Nationals B final, a swim that propelled him to the upper reaches of the GB all time rankings. Since then injury and a pandemic had combined to stall his progress, but now taken under the wing of of Zoe Baker at Winchester City Penguins, his development has been reignited. In December 2021 he dropped a 21.79 50 free in his new home pool, moving him to second on the all time GB ranks behind only Ben Proud, and showed that wasn’t a flash in the pan by improving his three year old 100m PB to 48.45 at the Edinburgh International Meet in early March. Those times put him firmly in the frame for Birmingham and on the brink for Budapest. Baker is off to coach in Western Australia after British Champs, with Burras (along with Winchester team mate Kayla van der Merwe) set to follow her and he’ll be hoping to take with him a maiden senior international call up. Whether it’s for England or GB or both will be determined this week.

You’d be forgiven for thinking that’s a familiar surname and wondering if there was a link to another great contributor to British swimming. And you’d be right, but it’s not James, because Mason Wilby is the son of Martyn Wilby, the coach who guided Gemma Spofforth to a world title and world record back in 2009 as part of a long career coaching at the University of Florida. That posting means Mason spent his early years in Gainesville before moving on to the University of Kentucky, but he has been a regular on British junior teams and picked up a 200m fly gold at the Commonwealth Youth Games in 2017 for England. It’s in that event that things get interesting this year, with Wilby having posted 1:55.97 at a meet in Greensboro, North Carolina in the middle of last year propelling him way up the all time British rankings to 5th. It’s also a time that sees him flying well under the English selection standard and knocking on the door of the British mark and with a lifetime best time in the equivalent yards event at the SEC champs and a finals appearance at the recent NCAA championships, his form is good heading to Sheffield.